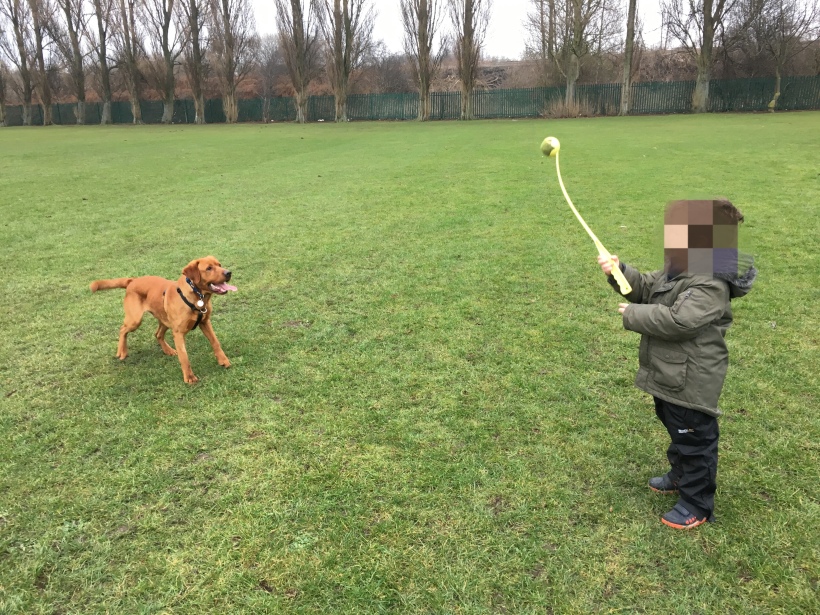 It was 8am on a Saturday morning and we were in the car heading to Yorkshire. For those of you unfamiliar with where we live, Yorkshire is five hours away from us. And we were taking kiddo and doing the journey in a day – we’ve got this!

Today was the day we were off to meet our potential autism assistance dog, our forever friend. And whilst most might consider the idea of ten hours of driving with an autistic child as ludicrous as snow in springtime, for us it was a no brainer. You see we are dog people, always have been. We grew up with dogs, we have owned a dog and to us we weren’t just off to meet a service dog, we were off to meet a new member of our family. This pup could be what fills the hole that our last beautiful woofer left behind. It’s a very sad story, and I’m going to tell it once now so that people understand why it hasn’t worked out in the past and why we now realise that our family is niche, it has autism running through it’s veins, and not just any dog will do. So here is the story of our amazing Barney dog…

I’m going to take you back to 2013. The hubby and I had always wanted a dog. I was working part time and he was Home based. We had just been given the news by a consultant that our chances of having a child were reduced by 50%. I was heartbroken. He was heartbroken. We felt empty. We had discussed getting a pup but were cautious that we were not to use a dog as a replacement for the child we didn’t yet have. So we left it. Until one fateful afternoon walking on Dartmoor.

We loved to walk, we were fit and active people. Something had always been missing though and that was a dog. But we had decided to leave it. Now I’m a big believer in fate, things happen for a reason. And that afternoon we just happened to walk into a pub owned by a breeder. He had one pup left. “Just meet him” he said. I knew there and then that if we met that dog he was coming home, so I quizzed the owner about pedigree, breeds, met the pups parents (who had their own bar stalls in the pub after a day’s work on the farm – amazing), asked for proof of certificates etc. He had them all. He was genuine. And before I knew it the most incredible dog had been put in my lap. He didn’t squirm, he settled in for a cuddle. And that’s the most important sign for acceptance from a dog. Did he try and escape? Nope. In fact he closed his eyes and had a doze on me I seem to remember. My hubby held him and was given the same reaction. He was perfect. He was ours. I’m now crying as I write this.

We knew that Barney (as he was named) would need lots of active training and exercise. We were prepared for this. I couldn’t wait for it! I worked a four hour shift at the top of my road and then Barney and I were out training and exercising for the rest of the day. More mental agility than physical at that age. Everything was perfect.

And just when we didn’t think life could get any better, I fell pregnant. So quickly. It went against everything we had been told. We were blissfully happy. And that’s when life changed direction for us drastically.

I became ill very quickly, it began at 7 weeks. I won’t go into this now as I have already blogged on this before but from then on my home was Hospital, and the hubby and Barney dog were left to fend for themselves. We found a fabulous dog day care, hubby worked from Home more and family were fantastically supportive. For a typical dog this would have been enough, but Barney being a working dog needed more.

Somehow we plodded through nine months, I missed the barney dog so much I put a picture up of him in my Hospital room. I felt like such a failure. But eventually kiddo was born and I came home. Problem was, my body had completely altered and was no longer fit and able like it was.

Barney dog loved the kiddo, right from the start. You could see it in his eyes. But with me unable to walk him we began to struggle and we were paying more and more people to walk him for us. The guilt we felt was unreal.

Then autism flourished in our household, and sensory processing became debilitating. We made sure Barney had a large space of his own to escape the meltdowns, but he wasn’t trained to deal with it. And despite never once being aggressive, you could see he was just sad. It was utterly heartbreaking. He began to act out and escaped out of the garden. He was bored. It became clear that we were not the right family for him. And so the day came when the hubby and I held each other and decided he needed to be re-homed. I can’t explain to you how empty my heart felt that day. I had let Barney dog down. I was the one who couldn’t walk, I was the one struggling to parent an autistic toddler. Barney needed to be put first. And I knew exactly where he needed to go. The call was made to my Dad who contacted a family friend, a very experienced dog owner who adopted rescue dogs including huskies, spaniels and collies. She already had six dogs, and I just prayed she would take him. Barney had to go somewhere where I knew he was safe, well fed and warm. I would never have slept again if I didn’t know how he was. The call came, and Barney had a home. K, to this day you will never know how grateful I am for what you did for us. You’re one of the only people I would trust with my dog. My Dad fills me in on how he is doing. He is happy, fit and challenged. Everything a working dog should be.

When Barney left I cried on and off for a week. We had let him down, life in our family had let him down. It felt like autism had let him down. Now I realise it’s just the twisting journey of life, and the most important thing we ever did was consider what was right for Barney, rather than just carrying on.

Time passed, years passed. We got our diagnosis, we became far more experienced parents, kiddo grew up. He was given a place at a special needs school. It was clear I wasn’t going to be able to go back to work. A hole began to form in our family. The time had come. We wanted a new dog. But not just any dog, this time we needed specialist.

After hours of reading I came across Autism Life Dogs. I rang purely for advice and was very upfront about what had happened to us previously. They were incredible. So friendly and knowledgeable. But most importantly, they didn’t judge our decision to re home Barney. They understood. All the staff were either autism parents or extremely experienced in the field. This was the company for us.

I’ve already blogged on our initial meet up, so now I skip to meeting our potential dog match. “Boss”.

It was all about kiddo. Would he bond? I was so nervous because I knew I would bond, I bond with pretty much any dog, as does my husband. We approached the pooch. It took kiddo a minute or two to register what was happening. But he didn’t recoil! Then before I knew it, he was asking for the ball launcher! And a game of fetch ensued. The giggles and smiles that came from kiddo filled my heart with joy, but also tears. I missed the barney dog at that moment. But seeing how happy kiddo was around Boss gave me so much hope. Boss was so patient with him. No jumping up. Just perfect play. It was clear, he was the dog for us. And we were the family for him.

We walked around the block and spent some time with the pup just to make sure. I could visualise him living with us, see him out training with me. He just fitted right in. Autism and all. We had found him. And hopefully he has found us.

So now we move to part three, some formal handler training for me! Boss has four weeks of training to complete before that. And we must all be aware, at any point Boss could fail and would not qualify as an assistance dog. Hubby and I are prepared for this. It’s the reality of finding an autism assistance dog.

Being the parents of an autistic child we are used to a bumpy road, disappointments or a sudden change in direction. That’s life. We must keep this attitude in mind on our Autism Life Dogs journey. But until then, I have a lot of doggie prep to do around the house 😁

AS OF SEPTEMBER 2018 I CAN NO LONGER ENDORSE AUTISM LIFE DOGS AS A COMPANY. Please see my blog on “Things To Consider When Buying An Autism Assistance Dog” for help with identifying the right company to work with https://theautismdiaries.com/2018/09/05/things-to-consider-when-buying-an-autism-assistance-dog/